For the past six years, I’ve celebrated, immortalized and made art out of books that have been banned. I call it the Crystallized Banned Book Series.
Books have been burned, banned and challenged for multiple reasons: from the 1930’s Nazi literary purge by fire (Säuberung), to present-day book banning including the popular Harry Potter books which have been banned in the U.S. more than any other titles. Recently, the banning of books has become an epidemic in the United States and now more than ever we need to stand up for the freedom of words and ideas. Since 1990, the American Library Association has received reports of more than 18,000 attempts to ban books from schools and libraries.
My crystallized banned books celebrate and immortalize the beauty, power and timelessness of books. Each book, banned or challenged by a range of institutions and for a variety of reasons, is frozen in time by crystallization and transformed into an enduring piece of art; a geological artifact. I want to show that regardless of constantly changing political beliefs, and shifting societal values, words and books are ageless and will survive. These crystallized books symbolize the tenacity and persistence of truth through language despite attempts throughout history to lock books and ideas away from the hands and hearts of readers. Notwithstanding the continuous onslaught on intellectual freedom – books, and all the wisdom and joy they bring, will live on.

Here are just a few samples of my crystallized banned books. If you’re interested in purchasing one, please contact me directly. 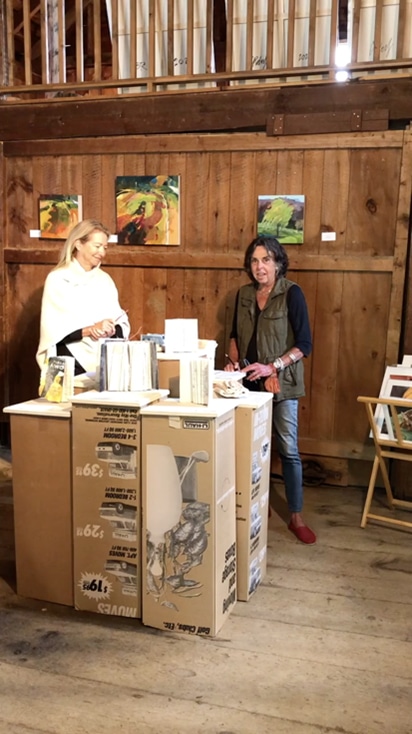 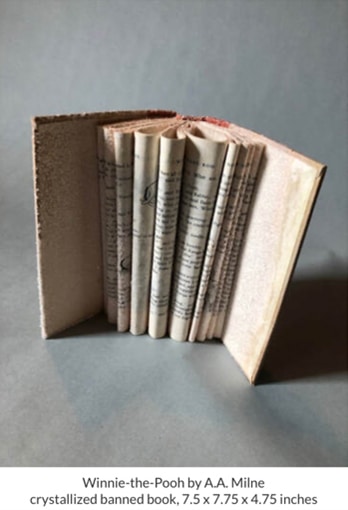 The beloved 1926 story of a legendary bear, Winnie-the-Pooh, has been banned throughout the U.S. because “talking animals are an insult to God.” Polish officials blocked a playground in Poland from using Winnie-the-Pooh as its mascot because “he is half naked which is wholly inappropriate for children.” 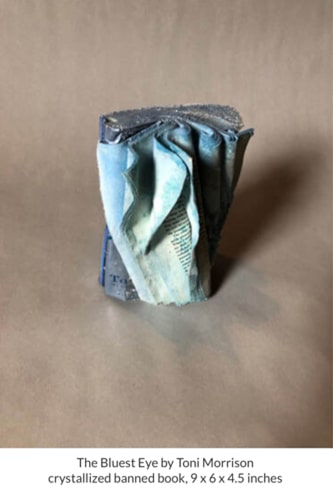 The Bluest Eye by Toni Morrison

Nobel Prize winner Toni Morrison’s novel has been banned, or challenged, nearly every year since its publication. First pulled from an eleventh-grade classroom at a high school in Fairbanks, Alaska in 1994, and then banned from the Morrisville, Pennsylvania High School English curriculum that same year because “it was a very controversial book; it contains a lot of very graphic descriptions and lots of disturbing language.” In 2014, it was challenged on a suggested reading list for high school students in Columbus, Ohio by the school board president because it was inappropriate for the board to “even be associated with it.” A fellow board member described the book as having “an underlying socialist-communist agenda.” 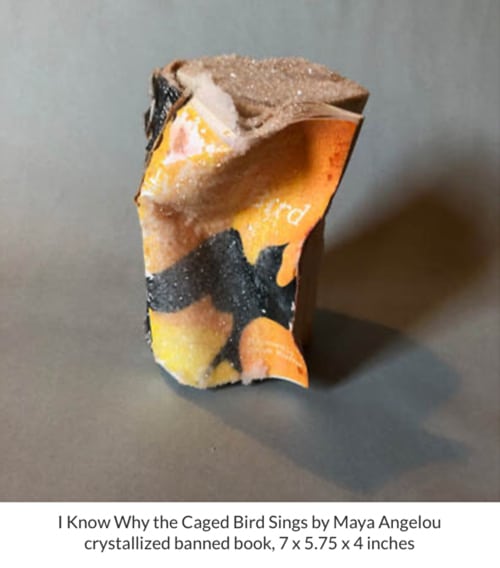 I Know Why the Caged Bird Sings by Maya Angelou 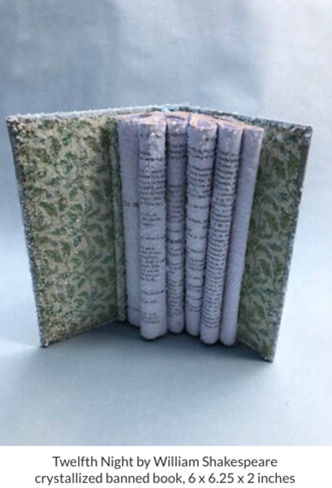 In 1996, school authorities in Merrimack, New Hampshire pulled copies of Twelfth Night off the shelves because cross-dressing and “fake-same-sex romance” were deemed in violation of the district’s “prohibition of alternative lifestyle instruction.”